Tremayne Moore is the founder of Mayntre Manuscripts, LLC, a publishing company with a vision of writing to write the broken soul. Like the one in six men who were sexually abused before the age of sixteen, Moore knows what it feels like to be broken. Molested by a close family member, Tremayne spent much of his childhood in fear and yearning for someone to take his side.

Never dreaming of becoming a writer, he aspired to sing and be a guest performer on Soul Train. As a child, Tremayne loved to sing and read. At the tender age of nine, he tried his hand at writing but he didn’t believe it made sense so he stopped. Several years later, a family member, 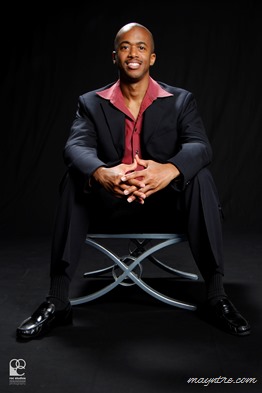 who was focused on becoming a rapper, encouraged Tremayne to write as he worked on his own songs as a way to keep Moore out of his hair. While he felt rap was vulgar, Moore tried to blend in. Eventually, he stopped using offensive language. Soon after, a close friend introduced him to poetry—that medium was more appealing to him and he embraced it.

After writing a poem with the classmate who introduced him to poetry, he accepted his gift and began to write what was in his heart. Poetic prose flowed fluidly from Tremayne’s pen, providing a release for pain, a way to celebrate love, and the foundation for his life as a writer. Still, it had not been revealed to him that God would use his writing gift to help others.

Life progressed and writing was placed on the back burner. Around 2004 or 2005, Tremayne returned from his writing hiatus. At this time, two sisters in Christ prophetically spoke these words to Tremayne: “I have a vision. You will write something that will change someone’s life, or even be quoted till the end of time.”

Again, he didn’t think anything of it, even though numerous people encouraged him to put a book together. Tremayne was focused on writing to be a blessing to someone. In 2009, Tremayne released Take it from Me, which pushed him into his prophetic destiny. Many lives have been blessed through the poetry God gives to Tremayne to write. His prayer is that the people he reaches will be led to open their hearts to the Holy Spirit and that people pursue their passions and talent for the Glory of God. He wants all people to be propelled into their prophetic destinies, living blessed, highly favored, and empowered to prosper under His hand.

Tremayne is committed to educate youth, parents, pastors, and community members concerning child sexual abuse/teenage suicide through social media and community involvement. Moore holds a Bachelor of Science in Accounting from Florida A&M University and a Bachelor of Science in Management Information Systems from Florida State University. His book “Deaf, Dumb, Blind & Stupid: Michael Anderson’s Fight for Life” was listed on OOSA Bookclub’s The Best of 2012.