“I don’t think anyone can read this story and not be affected in some way. I had to wipe tears as I was reading; it’s something that must be talked about.”
– Shelia Goss (also known as Sparkle), author of Sade’s Secret 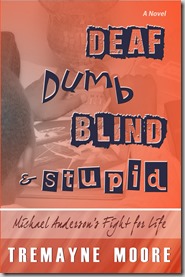 Tremayne Moore’s, Deaf, Dumb, Blind, and Stupid: Michael Anderson’s Fight For Life immediately got my anger against physical and sexual abuse brewing in my soul. Readers will feel Michael’s confusion, loneliness and isolation after suffering unspeakable abuse from a family member. Though fiction, the story is all too true for children in our neighborhoods, schools and churches. Deaf, Dumb, Blind and Stupid will educate readers on the signs of abuse. Moore’s reading group reflection questions for consideration will promote open discussions. Public awareness will be a life triumph for Moore’s character, Michael Anderson

– Ellen Thomas, author of THE BIPOLAR EXPRESS: One Christian Woman’s Life Journey In The Company Of A Child With Bipolar Disorder And Asperger’s Syndrome

Tremayne’s story is raw and real, painful and personal. It will resonate with those who have been abused physically, sexually, and emotionally or those who know them. To think that Tremayne landed on his feet after his beginnings with faith and came to trust Jesus is beyond miraculous. This gifted author’s sincerity, commitment to Christ, and caring for those who ache and for those who flounder with a false Christ makes him an unusually vulnerable man; but one to be reckoned with in Christ; and one who offers the bare, unadulterated truth.